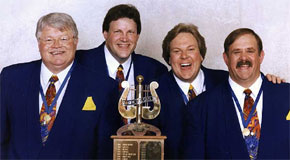 Representing the Maumee Valley (Toledo) and Elyria (near Cleveland), Ohio chapters and the Johnny Appleseed District, Yesteryear is well known as a talented and entertaining show quartet.

The original version of the quartet was formed in February of 1984. Over the years there were three personnel changes (and one part change) leading to the gold medal version of the foursome. Along the way they won the Johnny Appleseed District (1993) contest

The guys placed 17th in 1992 on their second Int’l contest appearance and jumped up to eighth in 1992. They moved up the ranks starting in 1994 placing 3rd, 2nd, 2nd and then the ultimate quartet goal.

Dan is a two-time JAD quartet champion having won with the Matinee Idols in 1976 and Yesteryear.

Mark is a graduate of Bowling Green State University and Ashland Theological Seminary. He sang tenor in the BGSU Men's Chorus ("America's Finest Singing Machine!") under the direction of R.D. Mathey. Mark has served in many Chapter and District positions including Chapter President (Maumee Valley Chapter [Toledo, OH] and Northwest Ohio Chapter [Bowling Green, OH]), Music/Chorus Director (The Fun Center Chordsmen [Mansfield, OH] and The Seaway Commanders [Toledo, OH]), and District President (Johnny Appleseed District). Mark was awarded the JAD Barbershopper of the Year Award in 2006. He started his competitive quartet singing with the popular Varsity Lettermen, a college quartet in the JAD from 1985 to 1988.

Rod has sung in three other JAD champion quartets. He was the lead of the Matinee Idols (1976) and Sound Syndicate (1979), and tenor of Sound Advice (1972). Rod is a past president and director of the Elyria Cascade Chordsmen.

Beef is a former director of the Maumee Valley Seaway Commanders Chorus in Toledo and also sang with Mark in the Varsity Lettermen. A graduate of Bowling Green State University he is well known as a member of a high school 50's group called Melvin and the Nuclear Turnips. He is currently active in the International contest favorite and popular show quartet, Hot Air Buffoons.

Yesteryear was inducted into the JAD Hall of Fame in 1998.

Mark Blake retired from the quartet in the Fall of 1998 to become a full time pastor. Tim Brooks (State Line Grocery) took over the leading, traveling with Yesteryear all over North America as well as Australia and New Zealand.