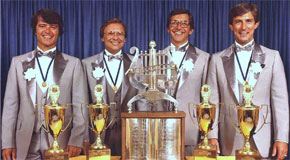 In addition, the group was featured by UPI and numerous magazines and newspapers. They've appeared on some of the most renowned stages in North America such as Carnegie Hall, Rockefeller Center, and Canada's National Arts Center. They've performed with the Boston Pops, the Portland Symphony, and on one occasion even sang as back-up for a major recording artist (Chip Taylor's album "Some of Us," Warner Brothers).

Key to the group's popularity is their easy, musical style and stereo-like sound, which they developed in their early days of "woodshedding." Encouraged by this sound the four literally took to the street, singing on Boston street corners for appreciative couples and students.

"You could say we took quartet harmony back to the streets where it flourished at the turn of the century and through the 1920's in the United States".

"Needless to say we were encouraged by the reaction we were getting from the people who enjoyed it." Like any fledgling musical group, the quartet initially sang anywhere people would listen -- in coffee houses, Harvard Square, outdoor malls, and other public gathering spots like historic Boston Common. Hence, their name.

During the years they competed, 1971-1980, the group was noted for openly criticizing the SPEBSQSA system of judging. It was (and remains) the practice for competition judges to serve as coaches for the very quartets they eventually score in contest. The quartet believed that this practice was a monumental hindrance to both impartiality on behalf of the judges and creativity among quartets (resulting in the judge-coached quartets to sound similar to one another). The bass of the quartet openly attacked the practice as questionable.

The quartet went so far as to protest by NOT competing in the 1976 International competition, a move which many speculate prevented them from winning the Championship in ensuing years. Not that they cared, however, for the quartet sang primarily for their own enjoyment and for audiences who appreciated their efforts.

After receiving a silver in 1979, the members agreed that 1980 would mark the last year they as a quartet would compete in International competition. Imagine their surprise when, in Salt Lake City, Utah, they were finally awarded the highest honor a barbershop quartet can achieve: International Champions.

However they would not be able to enjoy their success for long. While on the way to work one morning in 1982, the lead, Rich Knapp, was involved in a devastating automobile accident which not only left him totally deaf in one ear, but unable to tune.

The quartet then turned to Tom Spirito, lead of the popular two-time silver medalists Four Rascals and Knapp’s inspiration, to fill in. They performed on a limited basis with Rich eventually recovering and coming back to sing lead again. The BC performed on the AIC Show in 2005 to mark the 25th anniversary of their historic win.