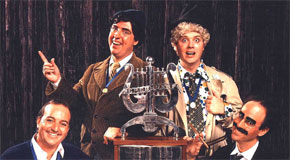 The quartet is in a sense a spin-off of The Grand Tradition, international bronze medalists in 1980, '82, and '83, of which Dan and Bob were members.

John Miller had won the gold in 1979 as bass of Grandma's Boys, and John Sherburn sang with the Crown City Good Time Music Co. , five time semi-finalists, and the Dapper Dans of Disneyland, among other quartets.

Although the Marx Brothers routine is their best known, the always-entertaining foursome has appeared as leading characters of Star Trek, and as Charlie Chaplin, W. C. Fields and Laurel and Hardy, and other roles.

The quartet semi-retired in 1989, when Sherburn replaced Larry Wright in the summer of 1988 as lead of the 139th Street Quartet. Bobby Gray went on to sing with the popular and 5th place medalist in 2004, Saturday Evening Post / SEP. They also won the Seniors gold in 2015. Dan Jordan replaced Sherburn as lead of 139th Street in the summer of 1991 and sang with the quartet through Nov of 2010, grabbing a 4th place medal in 1992. Jordan went on to form the popular show foursome, The Perfect Gentlemen in 1998, and remained with them thru Nov of 2012. They were awarded the Harmony Sweepstakes Natl A Cappella championship in 2002.