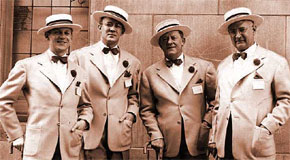 Roy Frisby enjoyed singing as a young man and made some extra money as a professional singer while attending high school and college. He studied voice at the Indianapolis Conservatory of Music.

After college, Frisby worked in the development division of a bank. In 1940 one of his accounts was National Aluminum Corporation, where Frank Thorne was vice president and director. One evening in October 1941 Thorne invited Frisby, Jimmy Doyle and Herman Struble to his home for dinner. Frisby was hopeful of drumming up some bank business, but Thorne wanted him to sing in his quartet.

The Elastic Four was organized that night in Thorne's parlor with Frisby singing lead. Struble had won scholarships at Valparaiso University and DePaul as a tenor soloist and sang with the American Opera Company for three years. Doyle was also a tenor and sang for two years with a foursome known as the Trevette Quartet.

He then sang lead in the Old Oak Four, a traveling vaudeville quartet, before being enlisted as baritone for the Elastic Four. Thorne was an accomplished instrumental musician but enjoyed quartet singing. Once described as a lyric bass, he confessed that he did not know what that meant. He sang in the Plow City Four in Canton, IL and wrote many Elastic Four arrangements.

The quartet rehearsed about eight hours a week in 1942 to prepare for that year's SPEBSQSA national contest in Grand Rapids, MI. Sixty quartets competed; there was no preliminary round of competition. The quartet appeared in straw hats, canes, suits, and spats; some quartets objected to their "fancy attire".

The Elastic Four were named winners and their picture appeared on the back page of the Chicago Herald - right next to a photo of a girl who had killed her grandmother.