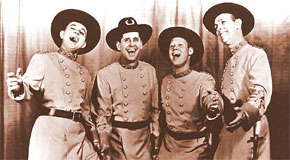 The Confederates is the Barbershop Harmony Society's 1956 International Quartet Champion.

"Save your Confederate money, boys, the South shall rise again!" That song by the Confederates, 1956 International Champions, was to go down in history, and the quartet went on to become a true legend within the Society over the next 13 years.

Organized at a Memphis Chapter party in September 1953, the Confederates were a popular quartet even before they won the championship. Composed of George Evans, tenor; Dave LaBonte, lead; Bill "Buz" Busby, bari; and Wally Singleton, bass, the foursome appeared in authentic-looking Confederate officer uniforms, complete with dress swords, or as white-haired, frock-coated Southern "colonels."

But it was the songs they sang, the arrangements they introduced, and the way they sang them that contributed even more to their fame. Chloe, Red Head, Down Where the South Begins, and A Nightingale Sang in Berkeley Square are only a few of the songs still identified with the Confederates. In their first International contest in 1954 they finished 31st.

But the next year, in Miami, they leaped to second place, and in 1956 in Minneapolis they won the gold. Buz was seriously injured in an auto accident in about 1960, and the quartet laid out of the show circuit for about a year. Except for that period, however, they continued entertaining audiences throughout the country until 1969.


First organized on September 16, 1953, the boys were a product of three recently disbanded Memphis chapter quartets. It was clear from the start they would be “brothers in song”. They blossomed quickly and were immediately popular.

George and Buz were born and bred “Rebels” while Wally was a “damnyankee” who claimed he came “clean from Pittsburgh, P. A”.

LaBonte was a transplanted Yankee from Concord, New Hampshire. He made it a point to tell everyone he was from the “SOUTHERN PART”.

The Confederates' trademark was striking confederate officer uniforms, complete with white gloves, hats and a dress sword. They acted the part singing songs like Save Your Confederate Money Boys, the South Shall Rise Again, Down Where The South Begins and Goodbye, Old Dixie, Goodbye

Encouraged to enter competition, The Confederates drove 800 miles to compete for the first time. They entered the 1954 Dixie District regional quartet prelims in St Petersburg, Florida. They did very well and qualified for the International quartet contest to be held in our nation’s capitol.

The Confederates' 1954 “Charge On Washington” only resulted in 31st place so they fell back and regrouped.

The following year they again qualified to represent the Dixie District at International. In June of ‘55 they traveled to the Miami Beach International. A year’s experience and hard work paid off. They made an unprecedented jump from 31st to 2nd place.

Thanks to their unique arrangements, success on the contest stage and their crazy onstage antics they became one of the most sought after show quartets in the Society.

The Confederates averaged 45 shows each year.

On June 14, 1956 they competed at the Minneapolis International and won the battle. The Confederates outscored the second place quartet by 462 points.

Buz Busby was the longtime musical director of the Memphis Cotton Boll Chorus.

He and his chorus won the 1958 Int’l chorus contest. The Confederates became the first gold medal quartet to win chorus gold medals.

The quartet continued to perform for many more years despite Busby’s serious automobile accident in 1960 and the relocation of members to Georgia and Florida.

They managed to stay together until 1969 and their official retirement from the show circuit.

By the end they had performed in 46 States and Canada. They shared the stage with scores of celebrities including Dinah Shore, Dick Van Dyke, Pete Fountain and Al Hirt.

They considered singing on stage at Carnegie Hall one of their favorite highlights.

The members are no longer with us.

Buz Busby died in 1977 after a two-year battle with a respiratory disease. He was 47.

Dave LaBonte passed away in 1990 at the age of 71 after suffering many years with Parkinson’s disease.

George Evans suffered from Alzheimer's in his later years and died June 13, 2007 at 76.

The Confederates were trend-setters and ahead of their time. Their 17 year career was a very special time in our Society’s history. We were young and still growing.

They had a profound influence on many barbershoppers and clearly shaped the future of our style.