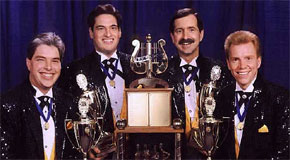 The The Gas House Gang is the Barbershop Harmony Society's 1993 International Quartet Champion. The GHG were one of the most popular quartets of their era, and they remained active for twelve years after they were crowned champions.

In the 1930's The St. Louis Cardinals baseball team was nicknamed "The Gas House Gang" to describe the players' fiery attitude toward the game and their fun-loving style of play. In 1987 a barbershop quartet from the St. Louis area chose the name to match its own personality. Since that time the energetic singing style and diverse repertoire of Kipp Buckner (tenor), Rich Knight (lead), Rob Henry (bari) and Jim Henry (bass) has proven the appropriateness of the title to people across North America and Europe.

After winning the 1988 Central States District Competition in their first attempt, they began a steady climb up the International Competition ladder which culminated in Calgary, Alberta, Canada, where they were awarded the 1993 International Quartet Championship.

They have been seen nationwide on the PBS special, "Voices in Harmony," and on NBC's Today Show. They have also been heard worldwide on BBC radio. Performers with whom they have shared the stage include such distinguished musicians as The Four Freshmen, The Swingle Singers, Rockapella, The Persuasions, The Chordettes, The King's Singers, The St. Louis Symphony Orchestra, Victor Borge, Porter Wagner, GLAD and the Grammy award winning group Chanticleer. The Gang made its theatrical debut in front of over 70,000 people as the barbershop quartet in "The Music Man" at The Muny, one of the world's largest outdoor theaters.

They produced five recordings which are consistently been top sellers and were awarded nominations by the Contemporary A Cappella Society of America (CASA), including Best Barbershop Song, Studio Album of the Year, Artist of the Year, Best Christmas Album, and Best Christmas Song.

The GHG retired in 2005 after losing their baritone Rob Henry to cancer in 2003.

They were named to the Society's Hall of Fame in 2008