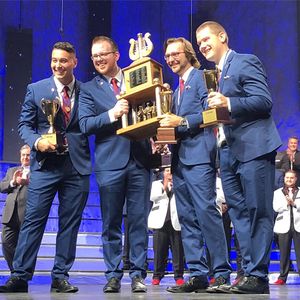 After Hours is The Barbershop Harmony Society's 2018 International Quartet Champion.

After Hours Barbershop Quartet, based in Central Illinois, started singing together in 2009. Since then, they have had the pleasure of singing in a variety of venues across the midwest. They have also enjoyed coaching from several distinguished barbershoppers, including Terry Ludwig, director of the Sound of Illinois Chorus, Kevin Keller, an influential arranger and BHS judge, and Eric Dalbey and Tim Waurick of Vocal Spectrum, the 2006 International Barbershop Quartet Champions.