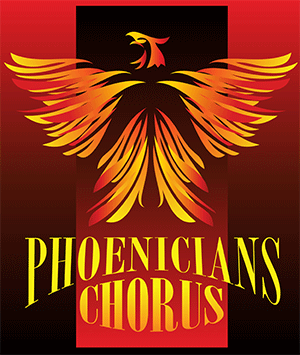 The "Phabulous Phoenicians" of the Phoenix-Saguaro Chapter of the Far Western District won the BHS International Chorus competitions in 1972, 1976, and 1983. All of their championships came under the direction of Lou Laurel, who directed the chorus from 1966-1989.

They were famous for bringing very theatrical performances to the contest stage, including costume changes and fireworks being shot from the risers.

After Lou's retirement, Gary Steinkamp ably took the reins of the chorus. And after a short transitionary period, the chorus returned to International form, placing 5th in 1993 and 1994, and 4th place in 1996.

In 2002, after some philosophical disagreements, a group of chapter members formed a new split-off chapter called the Greater Phoenix Chapter (Pride of Phoenix Chorus). This group was directed by Russ Young and Gary Steinkamp. Jim Casey directed the Phoenicians during this period. The two choruses competed against each other for a few years before re-merging in 2004, keeping the original Phoenix-Saguaro 1943 charter, but using the Greater Phoenix Chapter name. Right after the merger, the chorus took the interim name Greater Phoenix Chorus, and gathered ideas for a new name; The Spirit of Phoenix was adopted as the new name shortly thereafter. Fraser Brown and Russ Young served as co-directors during 2004 and 2005; in December 2005 Fraser retired, and Russ continued on as director until August 2009. Jeff Dolan served as interim director for the remainder of that year, and in January 2010, Gary Steinkamp returned to the director position.

A year of rebuilding

In 2015, more "philosophical disagreements" ensued, and in April of that year, Gary Steinkamp and a number of other members left the chapter and formed a new one. In an instant transition, Danny Ryan became the new director of the chorus.

2015 was a year of rebuilding for the chorus. Still branded as the Spirit of Phoenix, they were hosts to the Far Western District Fall Convention that October. Despite having a skeleton crew, and with the help of volunteers from the Mesa and Tucson chapters, the convention was a success. The chorus also competed, and finished third.

Rising from the Ashes 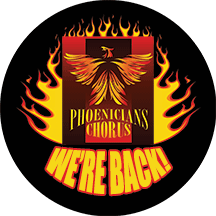 In 2016 they decided to cancel their annual show, and focus on a) focus on vocal technique, and b) build a new repertoire. At the chorus retreat in September, the result of more than a year of hard work was all coming in to place. It was truly a case of "Phoenix rising from the ashes". Recognizing this, a special meeting was held, and a big secret was planned. At the 2016 FWD Fall Convention in Riverside, despite being listed as the Spirit of Phoenix in the convention program, Emcee Russ Young had the honor of revealing the secret at the chorus contest: "There have been some corrections made in the program, but this is not a mistake. Representing the Greater Phoenix Chapter, under the direction of Danny Ryan, THE PHOENICIANS."

Ineligible for two years after each Gold Medal.

Member of the Far Western District. Ineligible for two years after each International Gold Medal.