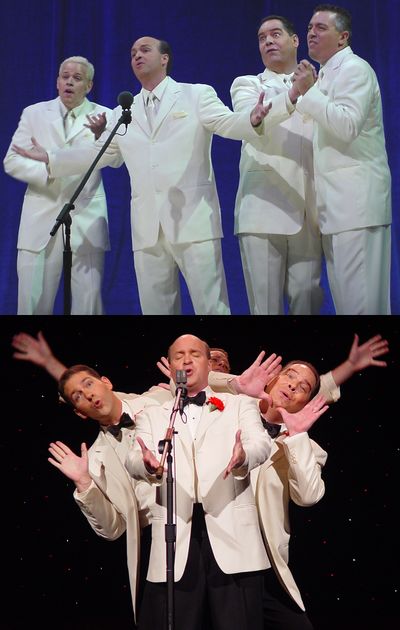 Metropolis performing on the International Convention Stage, Versions 1.1 and 1.2.

Metropolis is a quartet in the Barbershop Harmony Society known around the world for their entertaining performances, visual style and choreography, pushing the envelope of the barbershop art form. Between 2002 and 2006 they earned five consecutive medals in the BHS International Quartet Contest, rising as high as 3rd. The quartet is dedicated to "having the most fun possible while singing barbershop" and has become renowned as performing the most consistently entertaining barbershop quartet show of any active quartet.

Metropolis has performed over 450 stage shows in the United States and 8 other countries (Finland, Russia, England, Canada, New Zealand, The Netherlands, Japan and Ireland) and has traveled to more than 160 cities in 38 different states in the USA.

Metropolis came to the attention of national television audiences early in their career, beginning with their appearance on "What's Your Hobby", followed by the pilot episode of the "Fourth Floor Show" on E! Entertainment Television with Vance DeGeneres and the filming of a national Dr Pepper commercial. They have also appeared on Diagnosis: Murder in which Dick Van Dyke sang a song with the quartet in the episode entitled "Santa Claude". Metropolis has made several radio appearances and also performed in an independent film entitled "Pacino is Missing".

Each member of the quartet has served as section leader for their respective part as part of International Barbershop Chorus Champion Masters of Harmony and were part of the history-making performances in Salt Lake City in 1996 and Anaheim in 1999 which garnered the Masters their third and fourth consecutive International Chorus Championships. The quartet was also named the Masters of Harmony 1996 Quartet of the Year.

In addition to becoming 1996-97 Far Western District Champions, on May 9, 1998, Metropolis earned the Harmony Sweepstakes' Grand National A Cappella Championship - the first barbershop quartet to do so in the history of the event - and in 1999, the Contemporary A Cappella Recording Awards (or CARAs) nominated Metropolis' CD "Aural Hygiene" for "Best Barbershop Recording" and "Best Barbershop Song".

The quartet has performed an average of 23 shows per year for over 12 years and continues to perform around the United States as well as traveling to Europe, Asia, Russia and the Pacific Rim to teach and perform. In 2011, they came out of retirement for a "one-time show" for a local Sweet Adelines International chapter, at the behest of their friend, Caroline McLean (who also directed Brian Philbin's sister-in-law in the chorus). Shortly after announcement of the performance, the quartet was again inundated with show requests and has resumed (for the time being) a healthy show schedule for 2012.

The quartet also prides themselves on having The Official "the most fun and interactive website in all barbershop-dom".

They competed once in 1994 with Ken Potter on tenor, placing 25th.

3 years later, they came back with James Sabina on tenor. They were semi-finalists for three years, and then in 2000 they cracked the top ten. They earned their first medal in 2002, placing 5th.

They medaled three times, rising as high as 3rd in 2003 and then baritone Mike McGee moved to Florida. They competed with Mike once more in 2004, placing 4th when he elected to leave the quartet and was replaced by Kelly Shepard, who won two more medals (3rd in 2005 and 4th in 2006) with the quartet. They took a year off in 2007 and came back in 2008, coming out just ahead of Crossroads at Prelims in the Pioneer District (this was Crossroads' first prelims appearance), then placed 8th at International that year.

To honor the overseas barbershop organizations that helped propel the quartet's following, Metropolis returned to International to sing their Swan Song during the 2009 World Harmony Jamboree, not only reuniting Mike McGee with the quartet for a few songs, but also including both he and Kelly Shepard for their final performance of "The Lion Sleeps Tonight", their signature finale.