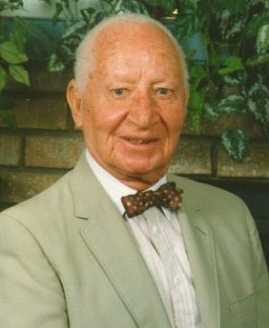 Lou Perry was a long-time member of the Tucson Sunshine Chapter. For many years, he arranged music and coached the chorus and quartets. The following was written by Lou Perry's sons John and Mark Perry:

Louis ("Lou") Philip Perry died on February 21, 2001 at home in Tucson, Arizona with his sons and friends at his side, of leukemia. Son of William Henry and Cora (Durant Woodard) Perry, he was born on September 14, 1910 in Charlotte, NC, and was raised in West Newton, MA. He was the eldest of five and was predeceased by his brother, William, and his sister Rose Kora McKenna. He is survived by his sisters Eleanor Hare of Needham MA and Joye Roberts.

He attended public schools in Newton, MA and after graduating from Newton High School he enrolled in Tufts University. At Tufts he discovered a passion for music and formed a jazz band and moved to New York City in 1932. He played and arranged music for a number of the "Big Bands" and orchestras in New York during the 1930's.

On November 24, 1938, he married Abigail Ruth MacKay and returned to Boston in 1940 to begin the professional study of classical music.

During World War II he worked as a machinist at Watertown Arsenal. He and Ruth had two sons and after the war he drove cab and worked as a chauffeur while continuing his music studies. In 1950 they moved to Needham, MA where they raised the family. He was a Methods Engineer in the manufacture of precision gyroscopes for NASA. But that was his day-job only, for in Needham he discovered barbershop quartet singing and began what was to become a 50-year avocation and the constructions of his life's gift.

As a classically trained musician, he recognized in the amateur harmonizing an unusual sound and voicing that he has later described as the same tuning as in classical string quartets and became intrigued with this indigenous American art form. First singing in chorus, then in a quartet, then directing a chorus, he discovered that the songs and musical form were able to make groups of men of all ages create not only music together but entertainment that moved the spirit of an audience.

He then moved on to coaching quartets and to use his training to write arrangements of popular songs of the early 20th century and to shape them to the barbershop form. He coached a number of quartets but three that have achieved international recognition are the Four Rascals, the Four Statesmen and the Boston Common, two of which won International championships.

When he retired, he and Ruth moved to Tucson for her health and he was able to devote more time to his music. He continued to function as a judge in regional and international competition in the Society and he continued to provide advice and coaching to quartets from around the country. He also entered a period of prolific arranging of old popular music for quartets around the world. He has written arrangements of literally hundreds of song, many of which have become standards of the genre. He also decided that Barbershop form should be preserved in a teaching institute and was instrumental in formation of the Harmony Education Program and Harmony College.

These quartets and the music that he arranged and wrote for them have defined the form of Barbershop Quartet Singing in America. The arrangements he made and the songs he wrote are his legacy and the thousands of men and women who sing them are the recipients of his gift.

In addition to caring for Ruth and working on his "hobby" at age 74 he began what was to be 16 years of volunteer work with Mobile Meals of Tucson delivering meals to seniors and disable people who are unable to prepare their own meals. He continued this work until five weeks before his death.