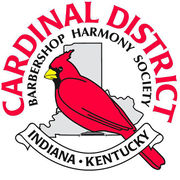 The Cardinal District is comprised of chapters from Indiana and Kentucky.