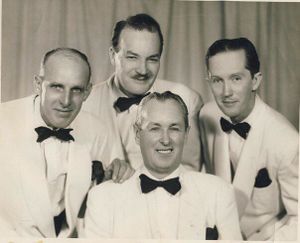 The Gaylord Quartet was active in the 1940s and 1950s in Toledo, OH. Photo names starting left and going clockwise: Virgil Henry, Joe Bauer, Al (Albert) Gause, Marvin Stimpfle. The photo is from about the same time as the 1951 BHS (then SPEBSQSA) International Quartet Contest which was held in Toledo that year. It is unknown if they competed in the competition.

There are a number of records that exist on vinyl that were recorded by the quartet. Some of them on Virgil’s personal recording machine:

Parts Sang in the Gaylord Quartet: