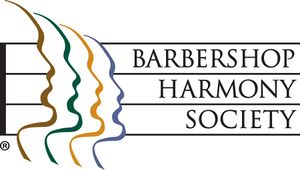 The Barbershop Harmony Society, legally and historically named the Society for the Preservation and Encouragement of Barber Shop Quartet Singing in America, Inc. (SPEBSQSA), is the first of several organizations to promote and preserve barbershop music as an art form. SPEBSQSA was founded by Owen C. Cash on April 11, 1938 at the Roof Garden of the Tulsa Club in Tulsa, Oklahoma. As of 2012, approximately 24,000 men in the United States and Canada are members of this organization whose focus is on a cappella music. The international headquarters was in Kenosha, Wisconsin for fifty years before moving to Nashville, Tennessee in 2007.

The original name SPEBSQSA was intended as a lampoon on Roosevelt's New Deal alphabet agencies. Because of name's length and the difficult-to-pronounce acronym, Society staff and members often refer to SPEBSQSA as The Society. For decades, SPEBSQSA was the official name, while the Barbershop Harmony Society was an officially recognized and sanctioned alternate. Members were encouraged to use the alternate name, because it was felt that the official name was an in-joke that did not resonate outside the Society. In mid-2004, faced with declining membership, the Society adopted a marketing plan that called for using "Barbershop Harmony Society" consistently and retaining the old name for certain legal purposes.

In reference to the acronym SPEBSQSA, the Society has said "attempts to pronounce the name are discouraged". Unofficially, it is sometimes pronounced as if it were spelled "Spebsqua". 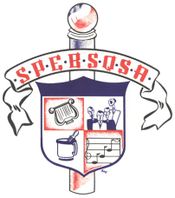 In late 2004, the Society established Barbershop Harmony Society as its new "brand name", with a logo and identity program released in 2005. Although the legal name remained SPEBSQSA, Inc., the decision was controversial, as many members felt that the new name did not reflect a mission of preservation and encouragement of the style. Many members were concerned that the term "quartet" had been dropped, fearing a movement in the direction of choral singing and downplaying quartet singing.

The Society is governed by an elected board of directors, and administered by a 30-person professional staff. The BHS Board of Directors employs the Carver Policy Governance Model.

In 2003, in preparation for a new headquarters location, the Society sold both Harmony Hall, a historic lakefront mansion, and its nearby facility (known as Harmony Hall West) located in a strip mall which the Society purchased in 1976 and renovated. HHW had housed finance, merchandising, IT and membership. Operations and staff from both buildings were consolidated into a remodeled HHW.

In 2006 the Society announced plans to move its headquarters to Nashville, Tennessee. In August 2007, the Society completed the relocation to 110 Seventh Avenue North, in Nashville.

A key aspect of the Society's mission is in the preservation of barbershop music. To this end, it maintains the Old Songs Library. Holding over 100,000 titles (750,000 sheets), this is the largest sheet music collection in the world, excepting only the Library of Congress.

Harmony Foundation, a not-for-profit organization, was incorporated in 1959 as a charitable subsidiary of the Barbershop Harmony Society; it raises financial support for the Society's programs.

To promote and improve barbershop singing, the Society annually runs international and district level contests for choruses and quartets.

When a quartet wins the international gold medal, they are considered champions forever and do not compete again. A chorus that wins the gold, however, must sit out of competition for two years, and thus may compete for the gold medal again in the third year following their win. 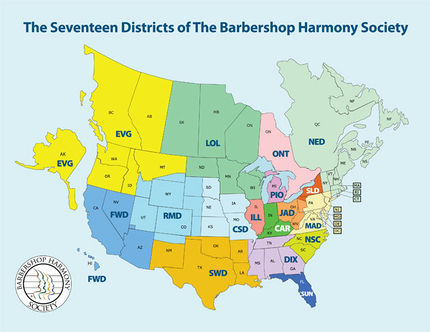 The Barbershop Harmony Society is organized into 17 geographical districts: