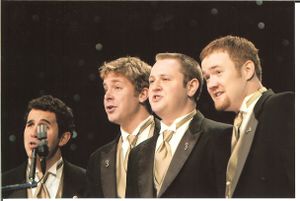 The nile manski trio was formed in late 2001 by Matt Woodward (tenor), Jeremy Jee (lead), Taylor Miller (baritone), Zach Materne (bass). Jeremy, Taylor and Zach all grew up in New Orleans singing, and attended the SWD Harmony Explosion Camp and met Matt Woodward from San Antonio, TX. By the fall of 2001 all four were in New Orleans. Matt & Jeremy were at Loyola University in New Orleans, Taylor was a senior at Jesuit High School (then to Loyola New Orleans), and Zach was at the University of New Orleans. After qualifying for the SWD in the spring of 2002, the trio place 3rd in the International College Contest in Portland, OR.

After the 2002 contest Jeremy left the quartet and was replaced with Franklin Diaz on lead, an Atlanta native also at Loyola New Orleans. In 2003 the group failed to qualify for international at the SWD contest. Shortly after Franklin and Taylor swapped voice parts.

In 2004 with Taylor on lead, and Franklin on Bari, the trio again qualified as the SWD College contestant and placed 3rd in the 2004 International College Contest in Louisville, KY.